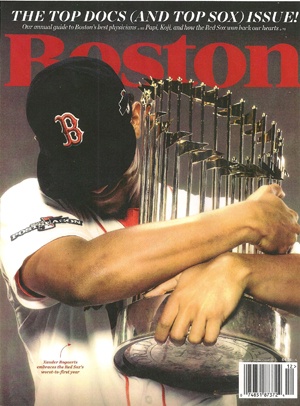 Chestnut Hill, Massachusetts (January 6, 2014) – This is the time of the year when people seeking a highly qualified dermatologist in the Boston-area can consult the Boston Magazine‘ s annual healthcare issue. Of the 19 dermatologists listed in the 2013 compilation of Boston’s Top Doctors, eight are from SkinCare Physicians. This honor was awarded to Drs. Kenneth Arndt, Jeffrey Dover, Michael Kaminer, Kay Kane, Tania Phillips, Thomas Rohrer, Jeffrey Sobell and Robin Travers. In addition, SkinCare Physicians’ Dr. Katrinka Heher was also listed among the Top Ophthalmologists.

The Boston Magazine‘s December issue showcases 650 physicians in 50 specialties. The goal is to assist consumers in finding doctors who are best qualified to meet their needs. For its compilation of Boston’s best physicians, the publisher teamed up with Castle Connolly Medical Ltd, a health care research company that evaluates tens of thousands of peer-nominated doctors throughout the medical community. The company carried out a careful screening of physicians educational and professional experience before a final selection was made among those doctors most highly regarded by their peers.

“It is a wonderful honor to have so many of our dermatologists selected,” Dr. Arndt says. “I’m very proud of the fact that many of our doctors have appeared on the annual Boston Magazine‘s Top Doctors list for more than a decade! Year after year, we are recognized as innovators and leaders in cosmetic and laser surgery, as well as general dermatology. Recognition of the nine excellent physicians in the Boston’s 2013 Top Doctors issue will help more people learn about our highly skilled specialists and our state-of-the-art practice.”

SkinCare Physicians is committed to providing the best possible and latest dermatology care in New England as evidenced by the high number of its physicians named to the Top Doctors list of Boston Magazine.

SkinCare Physicians is a comprehensive, state-of-the-art center for cosmetic and laser surgery, dermatology, dermatologic and skin cancer surgery, and medical aesthetics. The doctors at SkinCare Physicians are internationally renowned innovators and leaders in all of these fields, and the academic accomplishments of this group of physicians is respected throughout the world. They are authors or co-authors of more than 1000 articles in scientific publications, authors or editors of more than 250 books and book chapters, and serve as editors or on editorial boards of more than a dozen journals. Our physicians have been elected or appointed to senior leadership positions in dermatology, cosmetic surgery, laser, and surgery organizations, and have been awarded honorary memberships in many national and international medical and scientific societies.