Botox Shmotox- Does it really matter what toxin is used to treat my lines and wrinkles? 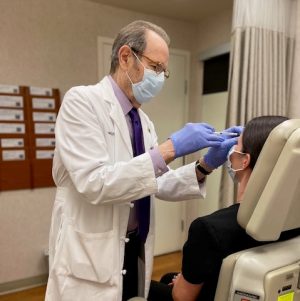 The short answer to this question is NO… so far. What really matters is the injector. Here is why.

Let’s review what Botox is and how it has evolved. Botulinum toxin is purified from Clostridium botulinum, a bacteria that may improperly grow in preserved or canned food. It is extremely potent-a baby aspirin size amount of powdered toxin is enough to make the global supply of Botox for a year. Botulinum toxin blocks the release of a chemical that instructs muscles to contract. If brow or forehead muscles slow down or stop contracting after exposure to botulinum toxin, the etched-in scowls and forehead lines which they caused then diminish or disappear. The toxin was initially approved by the United States FDA in 1989 for the treatment of strabismus (crossed eyes), blepharospasm, and cervical dystonia. Since that time interest in the uses of botulinum toxins for their medical and aesthetic effects has grown enormously, as has the market for such products.

The observation that injection of a small amount of botulinum toxin might be useful for diminishing frown and forehead lines was initially made by an ophthmalogic colleague in Vancouver. She was treating a patient for blepharospasm, but at one appointment the patient protested when she wasn’t given an injection into her brow-she said that a previous injection there gave her a “beautiful untroubled expression”. The ophthalmologist, Jean Carruthers, and her husband Alastair Carruthers, a dermatologist, then began to assess use of this compound for treating facial lines of expression. To assess its effectiveness, they next injected their receptionist, who within days had a smoother forehead and a “refreshed, open, younger expression”. Jean then decided to use the drug on herself, and says that she “hasn’t frowned since”! The Carruthers subsequently reported on their observations in medical journals, but its unique properties were slow to be recognized and adopted by physicians. Finally, in 2002, a botulinum toxin manufactured by Allergan under the name of Botox Cosmetic (onabotulinumtoxinA,) was approved by the FDA for the treatment of frown lines.

Same effects regardless of toxin brand

Regardless of which brand toxin might be injected, the effects are the same for they all contain the same toxin. Each product is somewhat different from the others, but botulinum toxin produces identical results in every instance and their durations of effect all cluster around three or four months so far. The properties of each brand vary in some ways- they must be prepared for injection in different dilutions, and their spread within tissue may vary, but once injected it is impossible to tell their effects apart. A person injected with one toxin looks identical to one injected with another brand. The most important aspect of being injected with these agents is to have it done by a skillful, well trained and experienced clinician who knows best how to bring about the subtle improvements possible with these unique products.

Next step, a toxin with prolonged effects

There has long been interest in identifying a botulinum toxin product with a more prolonged result, thus negating the need to return every several months to renew the effects of the current toxins. A new product, daxibotulinumtoxinA, manufactured by Revance, has been evaluated for several years and should be available for use in United States within the next several months. Based on several studies, the median time return to the original baseline frown expression was 28 weeks after having been injected. This means that the duration of effect of this toxin lasts at least about two months longer than that in any of the other brand toxins. When it becomes available it will certainly make a major difference in the use of these botulinum toxins by physicians and there will be intense interest from the public.

The term “Botox” is so commonly used that it has become a generic or household term, similar to when one refers to “Kleenex” for facial tissues or “Xeroxing’ when copying a document. When patients say they’ve been injected with “Botox”, unless they know specifically what has been used, they may have been injected with any one of four different brands of the toxins. They all work well and they have the same results. In the near future, however, when the new Revance toxin becomes available, there will then indeed be a difference in the duration of effects based on which toxin has been used. At that point it will be important to know specifically what has been administered and what to expect, but the importance of seeing a trained and skilled medical injector will not go away.