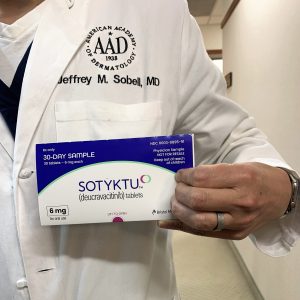 Those suffering from psoriasis have a new reason to rejoice! The FDA has recently approved a novel medication called Sotyktu® (deucravacitinib). Unlike biologics, which are administered by injection, Sotyktu® is a pill taken once a day. Astonishingly, there hasn’t been a new oral medication available for psoriasis in almost 10 years!

Sotyktu® is the first therapy in a new category of medications called selective TYK-2 inhibitors. The excitement surrounding this pill is how precisely it targets the excessive inflammation associated with psoriasis. It is believed that this explains the high clinical benefit and favorable safety profile observed in patients while on treatment.

Sotyktu®’s approval was based on results from two large clinical studies. After 16 weeks of treatment, nearly 6/10 subjects in study-1 had more than 75% improvement in their psoriasis (PASI 75*). Notably, this increased to 7/10 subjects by week 24. Many subjects experienced even greater improvement, with 1/5 achieving totally clear skin by week 52!

Side effects seen in more than 1% of subjects included mild upper respiratory tract infections, acne, oral cold sores, mouth ulcers and an increase in the creatinine phosphokinase (CPK**) protein found in muscle tissue. A screening test for tuberculosis exposure is mandatory before starting treatment, a requirement commonly seen with other available systemic medications for psoriasis.

Although Sotyktu® was just recently approved, the dermatologists at SkinCare Physicians who were principally involved in studying the drug already have over 3 years of experience treating patients thus far. The treatment of psoriasis has progressed exponentially just in the last decade, with researchers at SkinCare Physicians leading the way. If you suffer from this life-altering skin disease, find out what solutions are now possible by consulting with the skilled physicians at our Psoriasis Treatment Center.

You may also like:
What you need to know about newly approved Zoryve and Vtama psoriasis creams